Amount of comments to show:

LunaFerret wrote today on: Bloated Leper Rat
Didn't work for me at all. Everything died super early, including the third pet, Zandalari Footslasher. Script also didn't work at all.

salanaar wrote today on: Pack Leader (Humanoid)
Got it first try once I made these adjustments! Especially swapping for Booby Trapped Presents sealed the deal for me.

Tiamat175 wrote today on: Gloamwing (Critter)
The combo of pets worked for me but I believe the strategy's steps are miss-typed. - For clarification, I think the steps should be: - - Turn 1 Pass, beatle swapped in - Turn 2 Skitter - Turn 3 Void Crash - Turn 4 Pass, Void-Scarred Beetle dies, Darkmoon Hatchling comes in - Turn 5-7 Flock - Turn 8 Pass, Darkmoon Hatchling dies, Lovebird Hatchling comes in - Turn 9 Predatory Strike - Turn 10 Alpha Strike - - Thank you, regardless. This strategy worked for me after getting past some ... [continue reading]

LunaFerret wrote today on: Living Permafrost
This only worked because I had Molten Corgi as the beast. The first pet didn't survive nearly long enough to solo all of them.

LunaFerret wrote today on: Living Napalm
Decent strategy that did pull through, but I had to use all three pets as the hydraling died.

Tiamat175 wrote today on: Gloamwing (Humanoid)
I used a PP Kun-Lai Runt and made it with 9HP left. Had to try more than once.

DragonsAfterDark wrote today on: No-No
The original had to be reposted because it was accidentally deleted when empty strategies (ones with no pets or steps) were being deleted. The original date is much older than the one on that strategy, so the original comment still applies. This is a duplicate.

Runisco wrote today on: No-No
Mine is the oldest one. So the one you linked, is the duplicate one. Mine is over a year older.

PET NEWS - BY DRAGONSAFTERDARK
Things are heating up on Azeroth as summer is finally here, so let's light some fires and get some pets!

For the Midsummer Fire Festival holiday there are four pets, and today also marks the beginning of summer when the seasonal pet, Qiraji Guardling, becomes available.

From this holiday three of the pets are through a vendor, and the fourth is through defeating the holiday boss: Ahune, the Frost Lord. All of these pets are cageable, so if you don't have time to farm for the currency, or you're worried you might not have enough currency for all the pets, fear not! You can head over to your local Auction House and grab the ones you're missing.

Each of these pets will cost you 350 Burning Blossoms.

This pet drops from the bag you receive for defeating Ahune, the Frost Lord, when queuing through the dungeon finder. Ahune is located in Slave Pens in Outlands' Zangarmarsh.

Summer in the Northern Hemisphere also marks when the seasonal pet, Qiraji Guardling, becomes available. This pet can be found in Silithus, and it has quite a few breeds, so it might take some time if you're looking for a specific one.

Don't forget: you need this pet to complete the Kalimdor Safari Achievement.

It will be available this year until 21 September

And that's everything! We at Xu-Fu's wish you all the best in your pet collecting and battling endeavors, so until next time: happy battling & happy Midsummer!
3 Likes - 0 Comments
Read full article

PET NEWS - BY DRAGONSAFTERDARK
Dragonflight Pre-Orders are live, and with it we get two new pets!

Give a toasty warm welcome to our new fire-breathing friends: Murkastrasza & Drakks 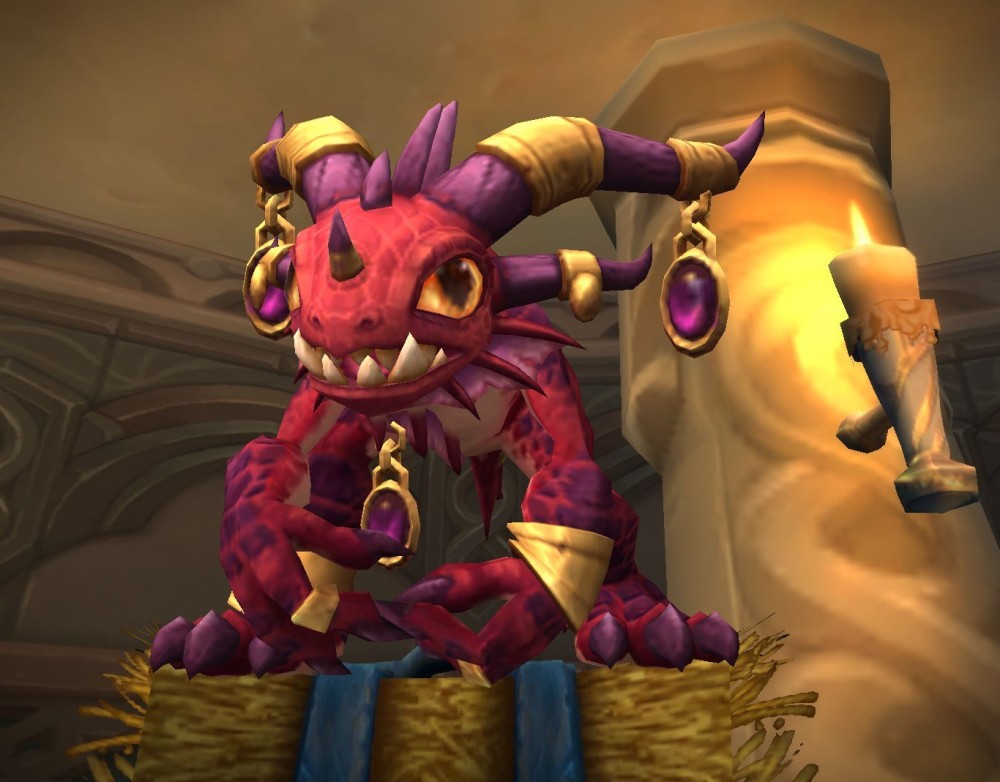 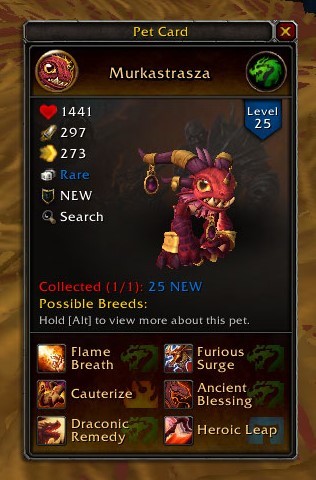 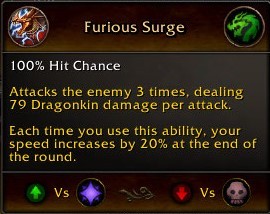 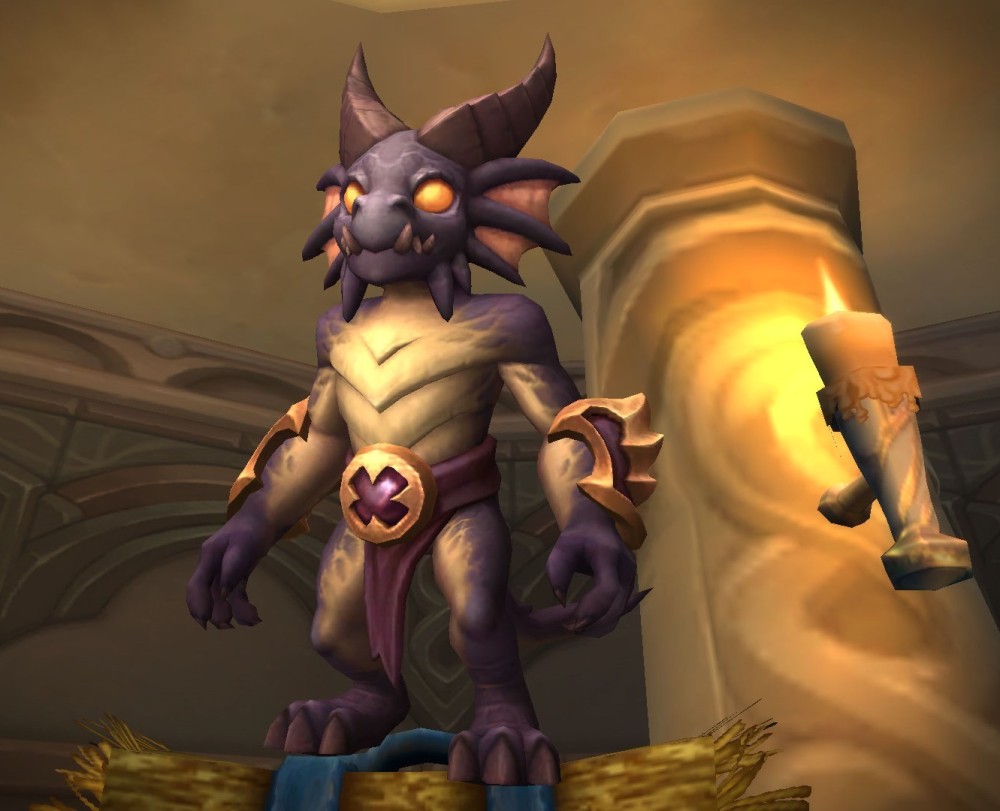 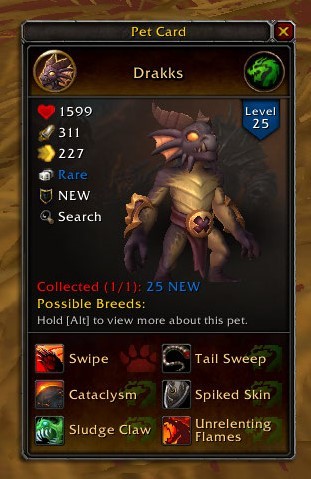 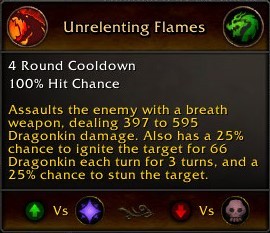 In addition to the two pre-purchase pets, we also got a new pet on the shop: Lil' Ursoc! 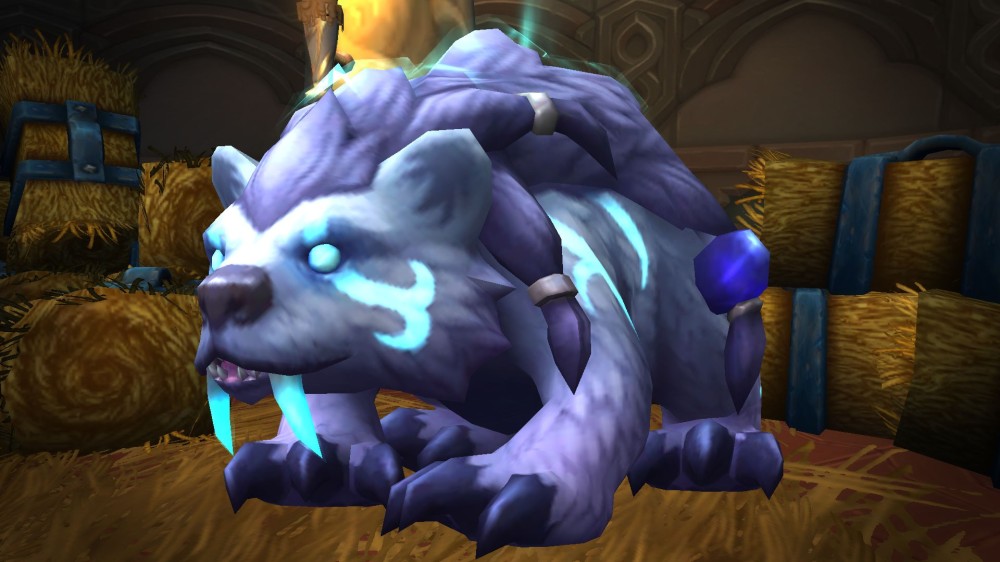 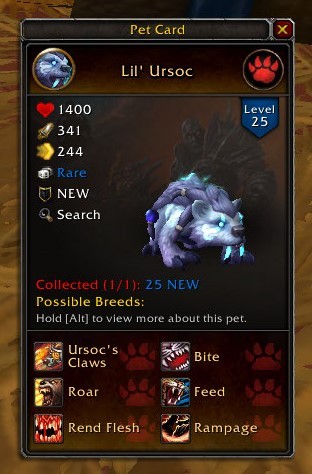 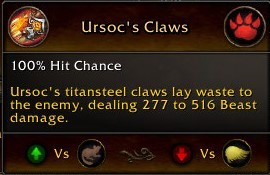 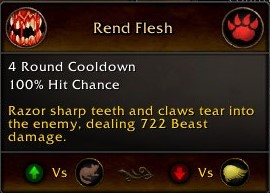 And that's it! What do you think of our new scaley and fluffy friends?

We at Xu-Fu's wish you all the best in your pet collecting endeavors, and happy battling!
7 Likes - 3 Comments
Read full article

PET NEWS - BY DRAGONSAFTERDARK
...And that's about it as far as we can see for 9.2.5 for pet battles.


Fixed an issue where Jingles battle pet would display as "Unknown" when summoned and its wreath and candy cane accessories were the incorrect size in the Pet Journal.


This should fix the issue with using level stones on Jingles, as well as its name not displaying properly. 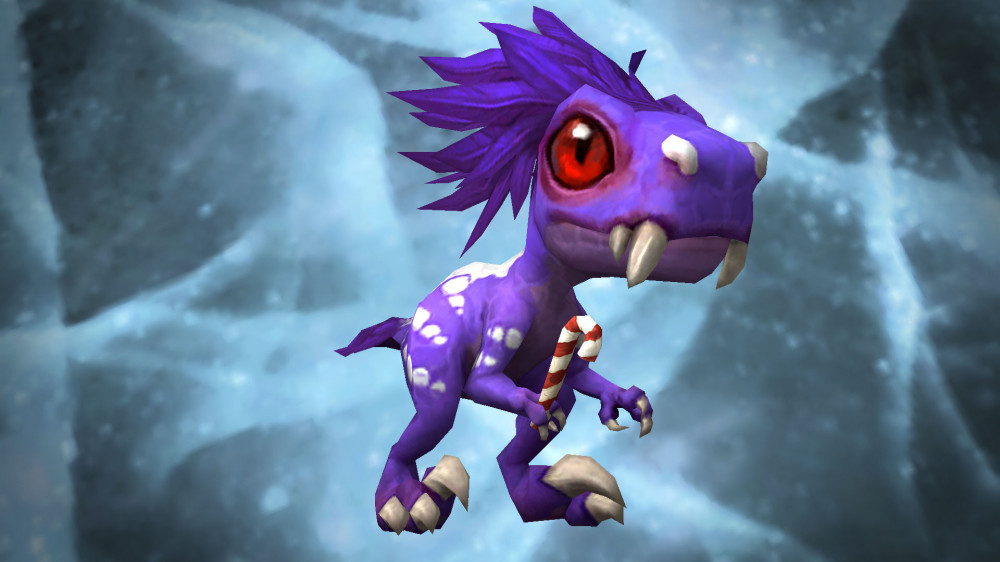 The bad news, however, is we haven't heard anything about the missing wreaths and candy canes for people with naked Jingles. It seems like things went awry when trying to make it like the reindeer, where the festive gear only displays during Winter Veil.

Wain, who runs Petopia and Warcraft Mounts, also pointed this out:


...the issue is that Jingles has two display IDs in the database, one has added Winter Veil decorations (added via a spellkit), and one is plain. There's a 50% chance of ending up with one or the other. If this was intended, the problem remains that you can only have one of this pet for some reason and you can't crate/delete it, so you're stuck with whatever appearance you opened first. So, allowing players to own multiple Jingles, and for them to be crateable/deletable would help.

It's also possible the two IDs were originally intended to be used on the same pet at different times of year (like, only decked out in Winter Veil gear at Christmas) but if so they never implemented it that way.


Hopefully we'll see them continue to work on these issues, and personally I'd like to see Jingles cageable like the other pets received from the presents.

Now, we have seen some updates to 'invalid' pets, like Tezpet, which might mean something is encrypted that will only show up once the patch goes live. Unfortunately it could also just be for internal testing reasons.

So, nothing new for the pet community as far as we can see, and likely nothing until the Dragonflight pre-order / pre-patch.

We at Xu-Fu's wish you all the best in your pet endeavors, and happy battling!
11 Likes - 1 Comment
Read full article

PET NEWS - BY DRAGONSAFTERDARK
The time has come, once again, to level all your pets!

The weekly reset brings the pet battle bonus week, and The Sign of the Critter offers a 200% increase on pet experience, so it's the perfect time to tackle that queue.

If you'd like to know what repeatable trainers to look out for this week, head over to our Powerleveling Guide to find out which ones are great for maximizing the use of the bonus xp. It will also offer the top leveling strategies for each of the fights, tips & tricks, and links to non-repeatable tamers as well as other useful guides.

Our widget on the home page will let you know which repeatable Legion tamers are up for the day!

Also, keep an eye out for strategies that have the Level tags for the regular, non-repeatable fights. Every little bit counts!

Super Squirt is one of those magical days during pet battle bonus week where Squirt is up in your WoD garrison menagerie, and it offers a useful, repeatable battle that does very well in leveling your pets, and has a nearby free heal. Here's where you can find all our Squirt Strats.

Though much emphasis is placed on Super Squirt, there are plenty of viable leveling fights from the repeatable tamers listed in the Powerleveling Guide. If you don't have your garrison up to par for Squirt, you'll likely still get a fair few tamers that will do nicely in Squirt's stead.


We wish you the best of luck in leveling your pets, and hope you have a happy battling week!
12 Likes - 0 Comments
Read full article 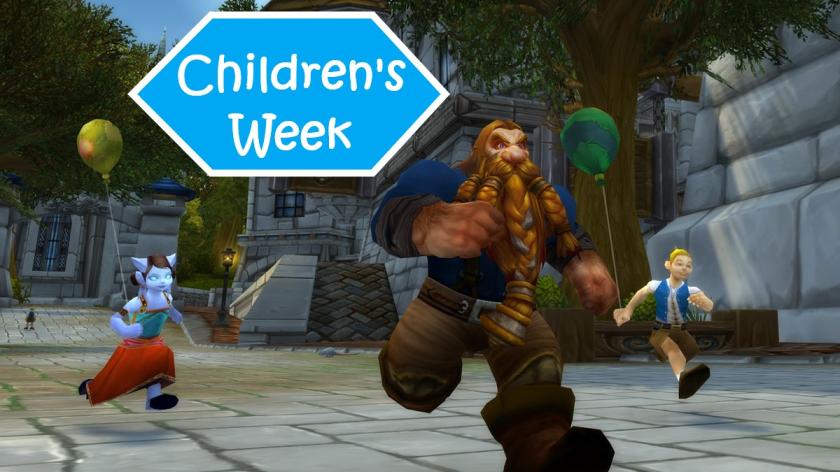 PET NEWS - BY DRAGONSAFTERDARK
You’re not quite sure how you got roped into this, but through the haze of last night’s drinking of a particularly heady Pandaren brew you recall a card game. In fact, as the bits and pieces slowly fall into place while you eat your breakfast, you remember someone unexpected and out of place at the card table: a matronly woman. After being thoroughly trounced, you pushed the winnings toward her.

Horde will go to Orphan Matron Battlewail in Orgrimmar, and Alliance to Orphan Matron Nightingale in Stormwind. This is a 6-part quest chain for both factions, and easy to complete. At the end of the chain, you’ll be rewarded with your choice of:

Horde and Alliance need to go to Shattrath and accept the quest from Orphan Matron Mercy, who will give Horde players a Blood Elf child, and Alliance players a Draenai child. This is once again a 6-part chain, at the end of which you’ll be rewarded with your choice of:

Horde and Alliance will need to go to Dalaran in Northrend and accept the quest from Orphan Matron Aria. This is the only faction non-specific chain set for Children’s Week. When speaking with the matron, you’ll be given the choice between an Oracle or Wolvar orphan. After your 7-part chain, whichever orphan you chose will be reflected in your pet reward:

Horde will go to Caretaker Padae in the Grand Bazaar in Dazar’alor, and Alliance will go to Orphan Matron Westerson at Hook Point in Boralus. This is also a 6-part quest chain that will conclude with your choice of:

There are also two achievements that are specifically tied to the pets of the event: Veteran Nanny, and Aw, Isn’t It Cute?

We at Xu-Fu’s wish you all the best in your pet collecting endeavors, and until next time: Happy Battling!
14 Likes - 3 Comments
Read full article
Your Account

RSS Link copied to clipboard!
Featured Videos
Get in Touch