Amount of comments to show:

CoJo wrote today on: MainbarQuestGuide
The TD script given in the article for leveling pets using Icespine Hatchlings never actually swaps your leveling pet in btw. - - To fix this, just add: - change(#3) [self(#1).active] - - In a new line right after: - if [enemy(#3).active]

wrote today on: Desert Survivors (Undead)
Didn't have Restored Revnant, so I swapped in a Blighthawk (2,2,1) Dive then Ghostly Bite. Might've been good RNG though.

wrote yesterday on: Shademaster Kiryn
Blazehound seems like it could replace Terrible Turnip. Going to try now since I don't have a level 25 Turnip. Lil Ragnaros has the same ability as well. Can confirm Blazehound works. I had to learn how to edit the script that was posted in the comments to replace the Turnip though.

wrote yesterday on: Aqir Sandcrawler
Tried 10 times. Each time it's Stampede, eat stun, Hogs dies. Perhaps Blizzard has changed something since this worked.

Lisa#1559 wrote yesterday on: Gloamwing (Magic)
I had to make my viscious globule first in order for the strat to work. -

Newest strategies
Looking for:
Xu-Fu is set up to be fully localized into the languages WoW is translated as well. All it needs is volunteers to do so!
If you speak English plus one of the listed languages and would like to help out, send an email or ping Aranesh on Discord!

Where on Azeroth is Jenafur?
PET NEWS - BY DRAGONSAFTERDARK
In one of the longest-running secrets of WoW, Jenafur is still eluding the Secret Finders among us. However, yesterday there was another clue, Scooby Doos:


I can say I have no idea what any of that means, but it's my sincere hope that it inspires someone on the Discord.

It joins this clue given on 8 January 20:


Here's a review of everything that's been confirmed so far in the pins:


If you'd like to try your hand at the secret, head over to the Jenafur Secret Finder page, and the Discord link will be at the top of the page.

If you join the Discord, remember to read the pins! They'll have all the information I've posted above, as well as docs on what's been tried, theories, and so on.

Wowhead also has a guide that can be found here.


Who knows? Maybe with this clue we'll see the next step completed, but don't drop your guard--this secret is said to be very difficult. If the difficulty increases with each step, I can only imagine how long the next one will take.

What say you? Do you think the Secret Finders have met their match? Or will they persevere?

Best of luck to all those involved, and happy battling!
1 Comments
Read full article

Wrath of the Lich King Timewalking
PET NEWS - BY DRAGONSAFTERDARK
A chill creeps through the timestream, and the howling of the undead scourge echos through the Caverns of Time. The Bronze dragons have once again called upon the heroes of Azeroth to battle the Infinite Dragonflight, and help preserve the timeline. This time we're being sent to Northrend, to battle the forces and allies of the Lich King. Though there aren't any pets to be found from the WotLK Timewalking dungeons, or the Timewalking Vendor -- Auzin -- there are some pets that can drop during this event.

The Ulduar raid in Storm Peaks is available for LFR Timewalking, and has a few pets that drop from the bosses.

These pets count toward the Raiding with Leashes IV: Wrath of the Lick King achievement. 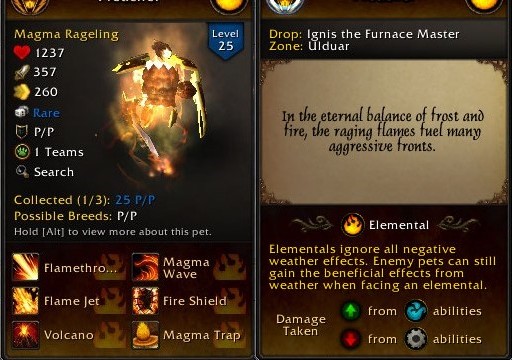 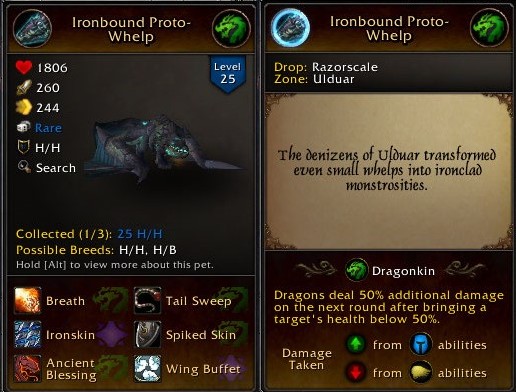 The Assembly of Iron 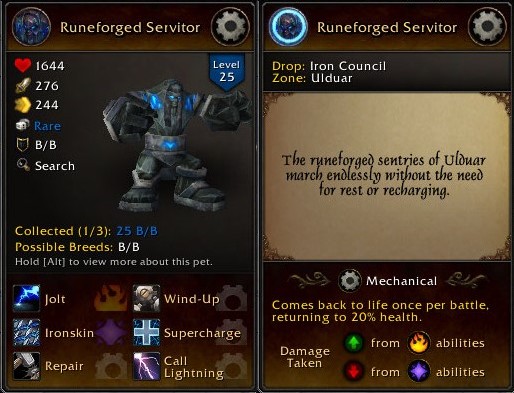 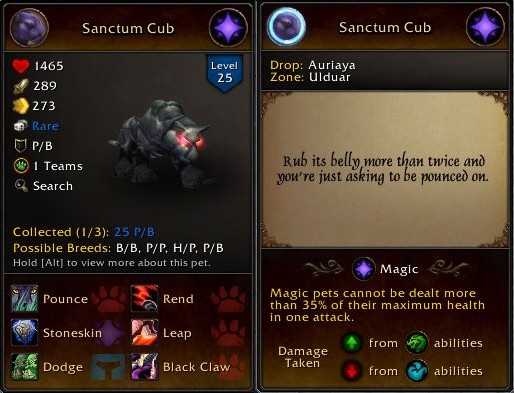 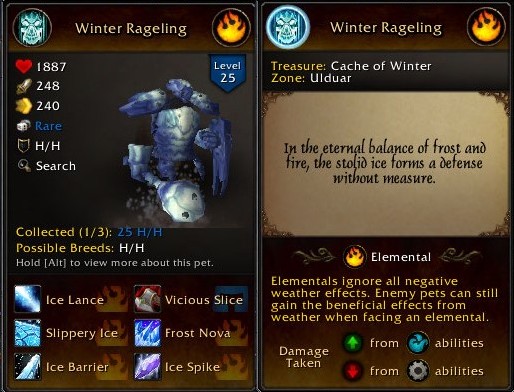 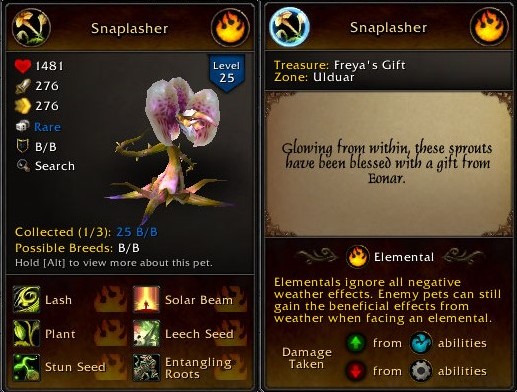 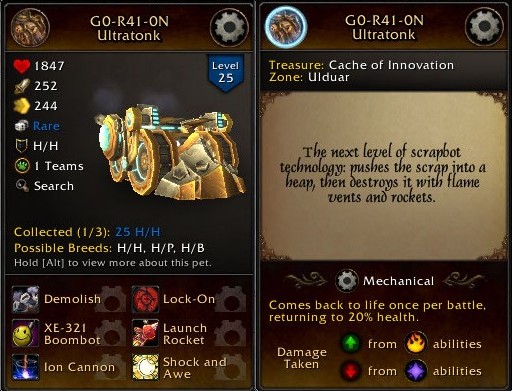 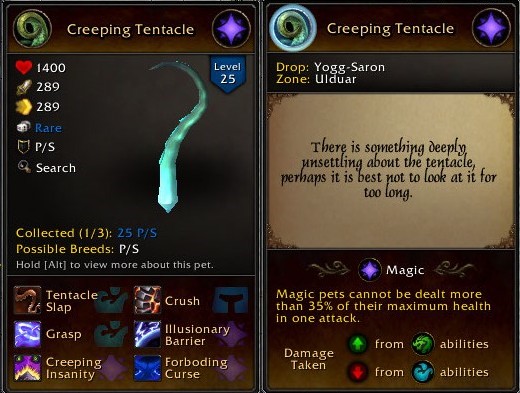 And those are all the pets connected to Wrath of the Lich King Timewalking!

Best of luck to you all on your drops, and happy battling!
0 Comments
Read full article

Pet Battle Bonus Week & Super Squirt on EU
PET NEWS - BY DRAGONSAFTERDARK
The time has come, once again, to level all those new pets that have (hopefully!) dropped for you from the latest patch! Or perhaps there are a few you still need to level to beat the new WQs and pet dungeon?

Never fear; it's pet battle bonus week! The Sign of the Critter offers a 200% increase on pet experience, and it's the perfect time to tackle that queue.

If you'd like to know what repeatable trainers to look out for this week, head over to our Powerleveling Guide to find out which ones are perfect for maximizing the use of the bonus xp. It will also offer the top leveling strategies for each of the fights, tips & tricks, and links to non-repeatable tamers as well as links to other useful guides.

Also, keep an eye out for strategies that have the Level tags for the regular, non-repeatable fights. Every little bit counts!

Super Squirt is one of those magical days during pet battle bonus week where Squirt is up in your WoD garrison menagerie, and it offers a useful, repeatable battle that does very well in leveling your pets. Here's where you can find all our Squirt Strats.

Though much emphasis is placed on Super Squirt, there are plenty of viable leveling fights from the repeatable tamers listed in the Powerleveling Guide. If you don't have your garrison up to par for Squirt, you'll likely still get a fair few tamers that will do nicely in Squirt's stead.


We wish you the best of luck in your collection of the new patch pets, and a happy battling week!
4 Comments
Read full article

Shenk brought up the idea to highlight pet related videos from and for the community, and here they are!
Conveniently in a little widget on the side for you to push it around to wherever you want it's home to be :D
It's super fresh so we're still experimenting a little but so far it looks neat.

Are you making videos about pet battles yourself and want to be featured? Cool!
To keep things under control, we added a few very simple guidelines so go have a read through them here at the bottom, please.

If all checks out, get in touch with Shenk to have your videos added!
0 Comments
Read full article

Darkmoon Faire ~~ March 1st - 7th
PET NEWS - BY DRAGONSAFTERDARK
March's Darkmoon Faire is up, and our main article on how to get all the pets can be found here.

Also, don't forget to pick up your WHEE! buff to get a 10% rep bonus for those new 8.3 reputations.

Status:
70%
More details in the Devlog