After you capture your first pets, pick your favourite teams and win against the first opponents, pet battling can be quite relaxing. If only there would not be this one particular tamer giving you a headache, right? The solution is often simple, open up Xu-Fu's Pet Guides, look up the tamer and follow the instructions. But there's often these letters as a requirement like PP or PS, what do those mean?
This is probably how most of you got into contact with "Breeds" and the obvious next questions are:
- What are Breeds?
- How do I recognize them?
- Are they important for me?
- What stats should a pet have and how are they calculated?

This guide tries to answer all of those questions. 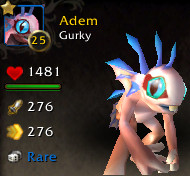 Each battle pet has three stats: Health, Power and Speed.
Health determines how many Health points a pet has. Power impacts the strength of abilities and Speed determines, which pet starts with their action in a round.

There is no clear answer to say which stat is the most important. It greatly depends on the abilities a pet has, your own play style and especially what enemy you are facing.
A brief overview of the pros and cons of each stat:

The more health points your pet has, the longer it can survive, simple as that. Of special note are abilities that use a specific percentage of your pets health points, such as Sunlight, Wish or Explode. Having lots of health is never bad, but usually it's not the stat people aim for primarily. If a pet has a high health stat, it's a nice bonus, but that's usually it.

Rule of thumb: "The more the better".
All abilities, except those that use a percentage or have a generic effect like a weather or stun, scale with Power. It increases attack values, healing, improves shields and even buffs and debuffs. Power makes our pets stronger and thus our enemies are defeated quicker. Pets with high power are usually quite popular.

The pet with higher speed starts a round and uses its ability first. This mechanic opens up a number of different aspects to consider. Speed is by far the most difficult and situational stat to consider and at the same time probably the most important one:

⇨ Speed is "All or Nothing". Having lower speed than the enemy makes speed entirely useless. Equally, if your pet is already faster than the enemy, having more speed has no effect at all. As an example, if you fight an enemy pet with 275 speed, having 276 is extremely valuable. Anything below 275 is pointless and everything above 276 gives no additional benefit.

⇨ Starting a round is often very important. It gives you more control over the fight and has a massive importance for some abilities:


⇨ Last but not least: defeated enemies can't attack anymore. If you start the round and defeat the enemy pet, their entire attack is skipped. As a side note, this does not count when fighting against Undead pets, since their racial ability makes them revive and still finish their next two attacks.


There is no direct way to influence which stats a pet has. However, pets can come in different breeds and those differ in their distribution of stats. You can therefore look for a certain Breed to have a pet with the stats that you want.
The distribution is based on a pets base stats and their breed.
In addition to the breeds, each pet has base stats that differ between pets. Turtles for example are tougher and often have more health, while rabbits are usually fast. Still, there are some rabbits that are not as quick as others by default. Due to the different base stats, for example a Grasslands Cottontail will never be as fast as a Snowshoe Rabbit, even with the same breed.

1.2 Maths behind the Stats


For the calculation of each stat, the following formulas apply:


Finally, what are breeds?
Breeds determine a weighting of stats. There are 10 different breeds possible and each comes in a male and female gender. However, the gender has no effect and is not used for anything in the game, so we are skipping this part entirely. Breeds are usually displayed as two letters that can be:

The following table shows all 10 possible breeds and the distribution of their stat weighting:


As you can easily see, breeds concentrating on specific stats and have no "balanced" option have a higher total amount of breed points. The more balanced, the fewer points.
For that reason, "pure" breeds are often more favourited. Hover over any pet on the page to see the available breeds. You can also click on them to see how that changes the stats of a pet, like here: Nether Faerie Dragon


A trained eye can often recognize a breed based on the stats. Many online pages (like Xu-Fu) also offer the option to see what breeds your pets have. Those two possibilities are not very comfortable, though. One of the best options is the ingame addon Pet Battle Breed ID.
You can find this and more useful addons explained in our Guide: Useful Addons 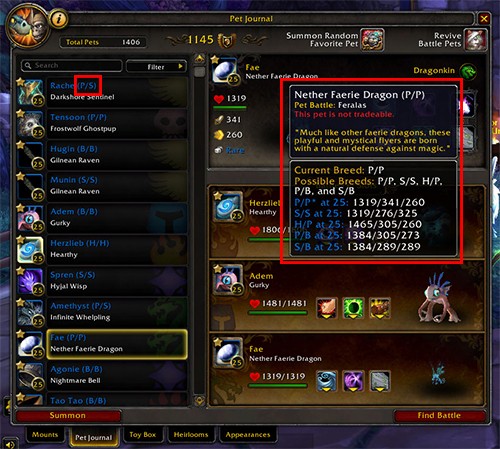 2.2 How important are Breeds?


Knowing about breeds is useful but not essential.
Without an addon or knowing anything about breeds you can defeat tamers, gain achievements and win fights against other players.
If you want to follow specific strategies (like many on here), you might run into some that have breed requirements essential for the strategy to work. In addition, it can make fights a lot easier if you have better fitting breeds.


There is no clear answer to this question.
Is a specific breed required for a strategy, it's easy.
If you want to prepare and capture a pet in the "right" breed from the start, it's much more complicated.
As explained above, pure breeds have more stat points in general which is always an advantage. Depending on the situation, that can be benefitial.
A good example are again rabbits. With their abilities Burrow and Dodge they benefit twice from high speed values.
Fast rabbits are incredible in evading enemy attacks. Slower rabbits are easy prey.
If your pet does not benefit specifically from a higher speed stat or a lot of health, you can't go wrong with high attack.
Usually, the most used and sought after breeds are P/P, S/S and P/S.


The quality or rarity of pets has an effect on their stats. The higher the quality, the higher the stats are. Player pets can have a rare quality (blue) at best while enemy pets can be of epic or even legendary quality.
Side note, it makes no difference when a pet reaches a certain quality. The calculation will always be the same no matter if you upgrade it to rare with a stone or capture it in rare quality directly.
The values used for above formulas are:
• Poor = 1.0
• Common = 1.1
• Uncommon = 1.2
• Rare = 1.3
• Epic = 1.4
• Legendary = 1.5