From April 2nd until May 1st 2021, Xu-Fu is hosting a virtual treasure hunt with Great Prizes!
This article explains everything you need to know. 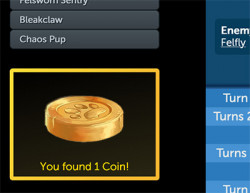 So how does it work? Well, you need to find and collect as many coins as you can!
They are placed on strategies like this ------>

There are many different things you can find scattered across strategies, not just coins! Magic portals, abandoned chests, even traders offering shady deals.
And you might stumble upon coin stashes from other players ;-)

Whatever it is you find, hover with your mouse over it to find out what it does.

The central hub for this game is your Treasure Vault.
You can access it through the user drop down menu. This also shows you the total amount of coins in your possession.

In your vault, you can:

Up to 50 coins are perfectly save in your vault. But if you have larger amounts, other players can attack you and steal them!
Your vault does have some built-in defenses but they don't start out very strong, so you might want to invest some coins into upgrading it.
The first upgrade costs 30 coins and is highly recommended. It will become more expensive after that.

Warriors are important to defend your own coin stashes and to attack other players. In your vault you can buy new warriors, train them to increase their power level, and heal defeated warriors.
Careful! If one of your warriors loses a battle and you don't heal them within 24 hours, they will be lost forever!

Each Raffle Ticket costs 10 coin and you can buy as many as you can collect coins. Each Ticket has a chance to win one of the raffle prizes. It is up to you if you want to aim for the big prize in the leaderboard or rather invest your coins into raffle tickets to increase your chances of winning.

Last but not least, your vault has a built in magic portal! You can use it once every 24 hours to find something great.
It will lead you to a strategy with something special hidden on it.
Good luck!

At the bottom of your vault page you will find a log of all your activity in the Treasure Hunt. Check back here if anything is unclear and you will see exactly what happened.
If there is any important updates, for example if another player attacked you or one of your stashes, those will be highlighted at the top of the vault as well for some time.

As mentioned before, it is not a great idea to store large amounts of coins in your vault or you will be easy picking for other players. Even more so, the players with the highest amounts of coins in their vault will be highlighted on Xu-Fu's front page! Better avoid that if you're trying to win one of the big prizes.

Go to any strategy that does not have anything else on it and you can stash your coins there. There's no upper limit, but better not put all your eggs into one basket, right?
Once you have placed them, you should add a warrior to your stash to defend your shinies. Simply use the "+" icon to pick one of your available warriors.

Don't remember where you hid all your coins? No worries, just go to your Treasure Vault which shows you all your stashes.

If you come across another players stash or find coins in their vault, you can try to steal them! Stashes can be protected by warriors, though, and vaults always have a defensive power that you will have to break through with a warrior of your own.

Each Warrior (or vault defense) has a clearly visible power level which plays an important role in their chance of winning a battle.
When two warriors clash, the fight happens automatically with a clear winner and loser. After the attack, you will see a report of how the battle played out.

Interested in the nitty gritty details? Read on. Otherwise, skip the last section, it's just a bunch of maths :D

The warrior with the higher roll wins the round and attacks. Their result is subtracted from the other warriors power level.
In case of a draw, nothing happens and the round ends without any changes.

Once one of the warriors power level drops to 0 power, the fight is over. You can see a typical battle log here: 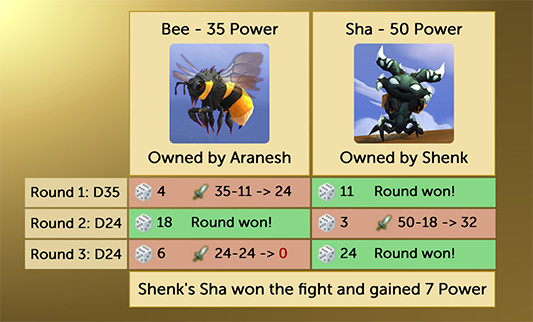 The winner of a fight will gain power depending on the initial power difference. A very strong warrior defeating a weak one will not gain much or no power at all. Same in the other direction, if you defeat a much higher warrior, yours will gain a lot of additional power.

You made it until here? Great! Now you know everything you need about coins, hiding them and fighting for them.
Go forth and conquer!