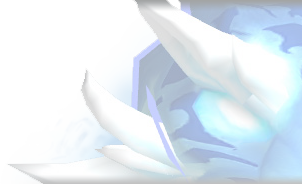 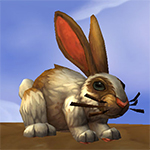 Source
The Spring Rabbit is available during the Noblegarden World Event. It drops from the Eggs at a rate of about 1 in 200, or can be bought from Noblegarden vendors with Chocolates.

You can buy the Spring Rabbit very cheaply at your Auction House.

Spring Rabbits start as Green (Uncommon) quality, so you will need a Blue stone to upgrade it to Rare if buying one that hasn't already been upgraded,

PvE
Rabbits are the dodge specialists, the masters of avoidance. If you are faster, and know when to Dodge and Burrow, you are very strong. If you’re faster, you can avoid 3 out of every 5 rounds of damage, and if you predict well, that could be 80%-90% of all damage, making rabbits surprisingly hard to kill. If you’re slower, you’re dead. Rabbits are roadkill against against Flyers with their racial. The Spring Rabbit has only one breed, S/S, and has the max Rabbit speed of 357 as a Blue 25.

If you know when your opposition is going to use their strong attacks, for example in fixed Tamer battles, your priority is to cast your Dodge and Burrow abilities to avoid them. You then use Flurry at all other times.

If you don't know your opposition's rotation, you will probably be best served by using Dodge on cooldown, then Flurry, then Burrow, and Flurry again until Dodge is available.


Discussion: Because everything about rabbits is based on them being faster:

- Flurry hits an extra time if it hits first.
- Dodge avoids two rounds of attack if it goes first
- Burrow avoids the incoming attack if it goes first.
you should bring a rabbit to a battle only if you know it’s going to be faster than a Tamer’s pet, or you are bringing a rabbit that is faster than anything you are likely to meet, which means a 357-speed rabbit in PvP.

In a Tamer battle, where you know the next move for sure, you can arrange your Dodges to maximum effect.

Since you can avoid 3 out of 5 rounds of damage, you want to time your avoidance to save yourself as much damage as possible. Since your opponent will often be casting non-damaging abilities like shields or heals, it is sometimes possible to avoid damage altogether!

Stampede is sometimes used instead of Burrow, to inflict Shattered Defenses and set up an opposing pet for a big hit from your next pet, or as part of a Bleed & Stampede strategy, but it’s more usual to use Ikky or a raptor for that.

Scratch is a bigger single hit than Flurry, occasionally useful in Sandstorm or against shields

79%
Percentage of strategies on Xu-Fu's in which this ability is used.
Slot 2

93%
Percentage of strategies on Xu-Fu's in which this ability is used.
Slot 3

48%
Percentage of strategies on Xu-Fu's in which this ability is used.
Stats
Level
25
Rare
Uncommon
Common
Poor
3
Ownership distribution
Breed Distribution
All pets in known collections are of the same breed: SS
70 similar pets